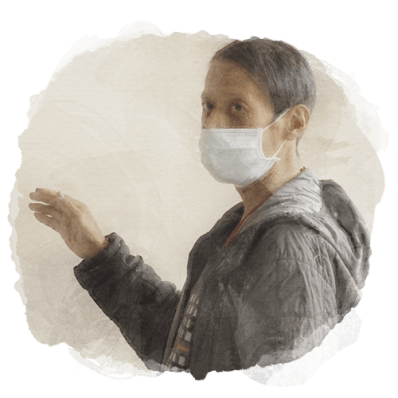 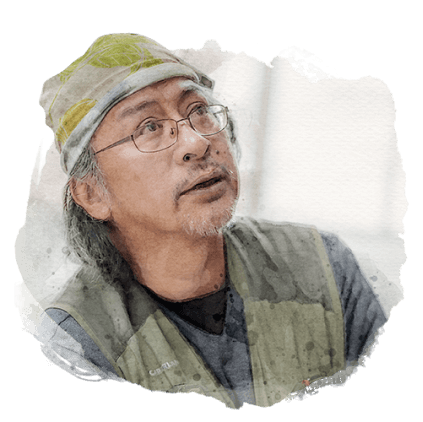 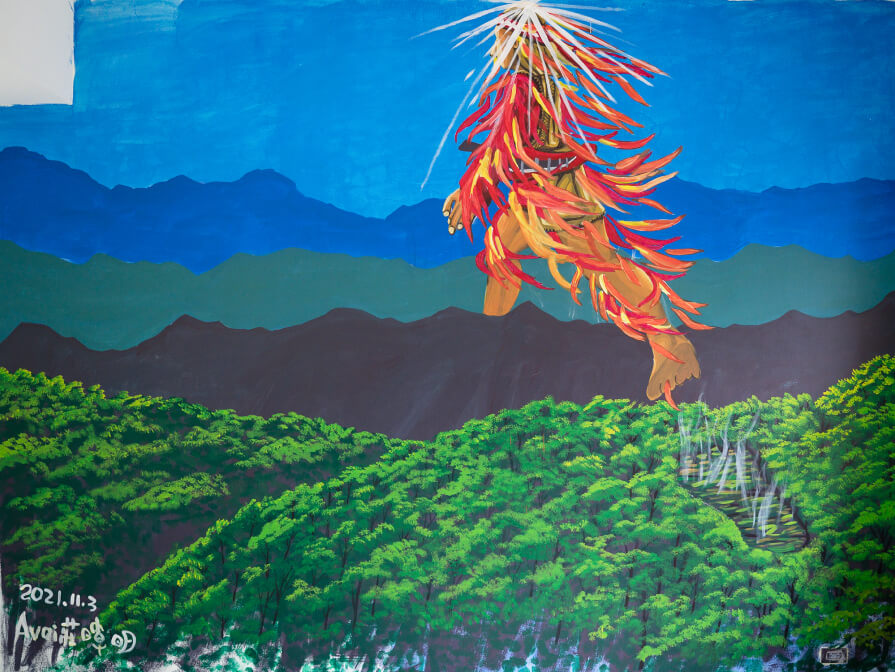 哈莫到過的地方，同時喚醒沉睡的生命、萬物都活過來，哈莫在達邦、特富野、樂野創造各種生物，天神替鄒族人選定的領地，等待大地和動物都創造之後，哈莫用力搖動大樹，樹葉落地後變成了人，就是鄒族及馬雅（Maya）族的祖先，一起生活在這個天神創造的大地裡，繁衍形成各氏族與部落。
A long time ago, the heavens and the earth began to separate. With a loud, rumbling sound, the world was transformed, and Hamo, the creator god of the Tsou people, appeared on Yushan mountain. Hamo had a big human shape, and big eyes, and he had magical powers. Hamo wanted to make the world more beautiful, so he strode forward, crossing the mountains step by step, creating a place for the Tsou tribe to live. He stepped on the land with his feet and created a vast and flat western plain.
Where Hamo has been, he awakens dormant life, and everything comes alive. Hamo created various creatures in Dabang, Tefuye, and Leye. Hamo shook the trees with force. After the leaves fell to the ground, he became a human being. That is, the ancestors of the Tsou and Maya peoples, they lived together on this earth created by the gods and multiplied to form various races and tribes.
返回藝廊
射日
莊暉明'avai阿伐伊・尤于伐那 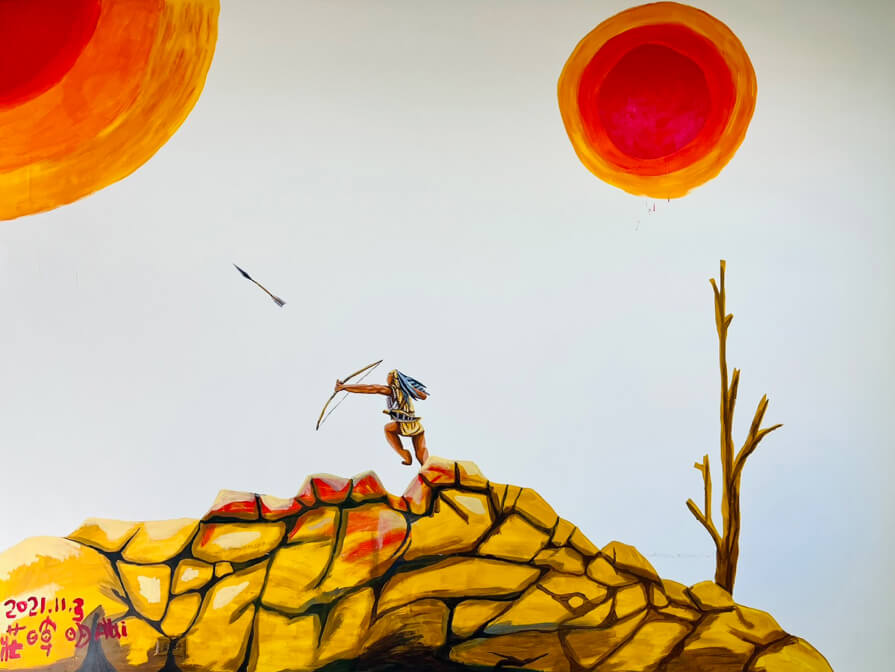 Shoot Down A Sun
莊暉明'avai阿伐伊・尤于伐那

沒了太陽，世界陷入長久的黑暗，動物和農作物都不見了，族人的生活變得更加困苦，族人開始不斷向太陽祈求，希望太陽能出現照亮大地，族人們真誠的祈求，感動了太陽，終於，沒受傷的太陽終於願意出現了，早上用溫暖的陽光照亮大地，又賜給萬物生命；而另一顆受傷的太陽變成了月亮，在夜晚守護大地，讓族人、動植物有休息的機會，再次孕育新的能量，有了晝夜、東升西落，族人們重新恢復日出而作、日落而息的生活，農作物再次豐收，從此萬物生生不息。
A long time ago, two suns appeared in the sky. The dazzling, burning light was constantly shining on the earth: two suns hanging high every day and all living things in the world were dying from the high temperature. Crops could not grow, and the tribesmen were unable to go out to work. Life was pain, in a world without night. Nobody knew what to do.
In order to solve this problem, the elders gathered at KUBA to confrere on a solution. At this time, a warrior volunteered to take on this task. He was determined to solve this problem, and vowed to shoot down a sun, hoping to make restore the living environment as before. The warrior did not think of the danger and ran with all his strength. Finally, the warrior caught up with the sun!
At this time, the warrior held his breath, drew his bow and arrow, aimed at the sun... and hit it! The heavens and the earth began to shake violently, and the warrior ran to hide in a cave, waiting for the heavens and earth to return to calm.
However, because of the warrior's arrow, the two suns were frightened and also hid. The sky outside was getting darker and the wind was getting stronger and stronger, and the world became dark. The warrior became regretful. How could it be like this?
Without the sun, animals and crops disappeared, and the life for the tribe became more difficult. The tribe began to pray to the gods, hoping that the sun would illuminate the earth again. The devout prayers of the tribe moved the suns, and finally, the sun that was not injured appeared. In the morning, the warm sunlight illuminates the earth and gives life to all things; while another wounded sun became the moon, guarding the earth at night, so that the tribe, animals and plants can rest well. With day and night, the tribe can get back to normal life, crops are harvested again, and everything became prosperous.
返回藝廊
大洪水
莊暉明'avai阿伐伊・尤于伐那 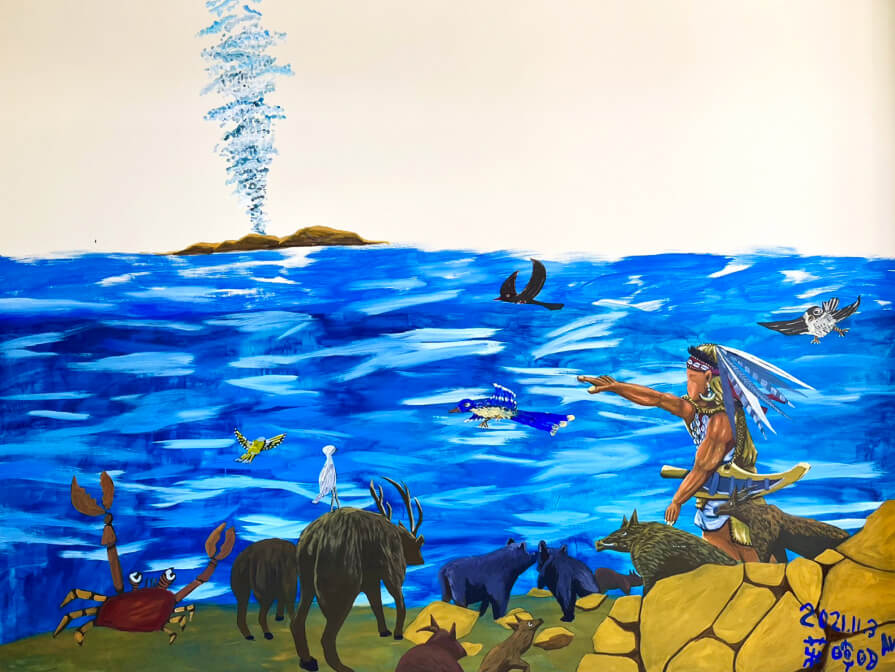 因為烏忽古鳥取回火種，所以族人容許牠在田裡吃小米，而哥有伊細鳥只能在田邊覓食。這兩種鳥的嘴尖都是短的、平的形狀，那就是取火種的時候被火燒過的痕迹。
A long, long time ago, there was a very huge eel lying in the river near Dabang. It blocked the tribe river, and the water became to flood, even went over the roof. All of a sudden, the land became the ocean.
In order to survive, people and animals all ran to hide in Yushan Mountain. They were really afraid of being submerged by the flood. The tribesmen waited for a long time, but the flood did not recede. Everyone was so sad that their hard-built homes have disappeared. Aside from comfort each other, they could only pray to the gods for a miracle.
When people were avoiding the flood in Yushan, they sent kojoise to look for fire. Although kojoise had found the fire, it burned his mouth because he flew too slowly, and failed to bring it back. Then the tribesmen asked ungu to look for the fire again. It flew very fast, so this time the fire was successfully brought back , and then everyone had fire for cooking and warming.
Because ungu had retrieved the fire, the tribe allowed it to eat millet from the field, and the kojoise could only seek food beside the field. The short and flat beaks of these two birds are the evidence of bring back the fire for the tribe.
返回藝廊
部落的生活
莊暉明'avai阿伐伊・尤于伐那 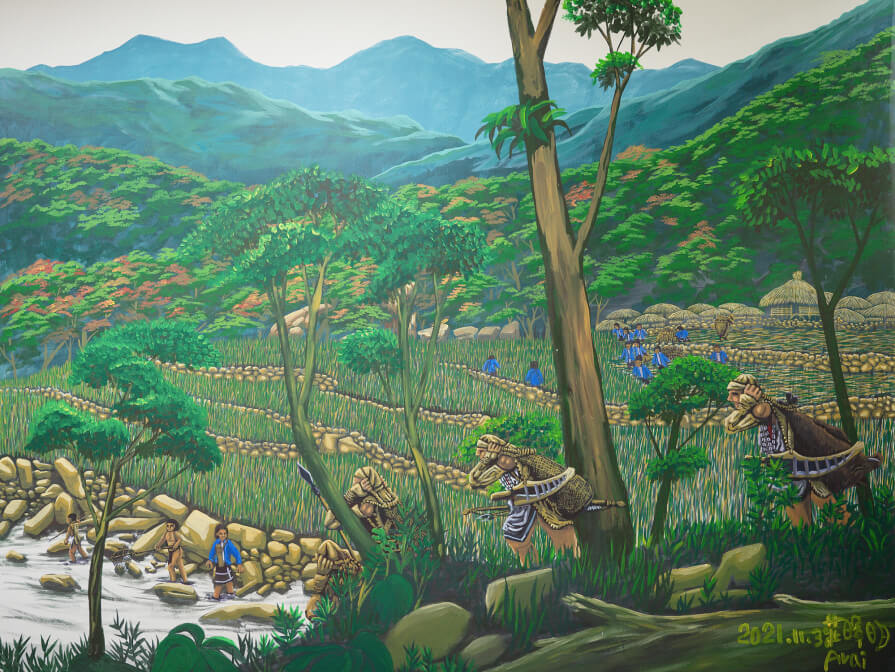 清晨天還未亮、星星仍掛在天空時，男子們會帶著神聖的打獵工具，帶著家人的祝福，上山打獵；婦女們背著孩子、手牽著孩子，走進田裡，彎著腰，耕作插秧，種植小米，把田地裡的雜草拔除，仔細呵護著小米苗，期盼小米健康壯大，長出結實累累、有著飽滿黃澄澄稻穗。
This is the life of the Tsou people!
You see, when the maple trees on the distant hills begin to turn red, it is time for millet to be sown.
In this painting, you can see the Tsou warriors going out to hunt, fish, and guard their homes. The women work in the fields, cook, take care of children, take care of things at home, and cooperate with each other.
The night before going out to hunt, the Tsou men were busy preparing hunting tools, including sharpening knives, making bows and arrows, sewing up straps, and carrying lucky charms made from the bark of hibiscus and praying to the wizards for a successful hunt, so they can safely bring the prey home.
In the early morning, before dawn, hunters went up to the mountains to hunt with sacred hunting tools and the blessings of their families. The women carried their children and held them in the fields. The weeds are removed, and the millet is expected to grow strong and golden.
返回藝廊
金黃色的豐收季
莊暉明'avai阿伐伊・尤于伐那 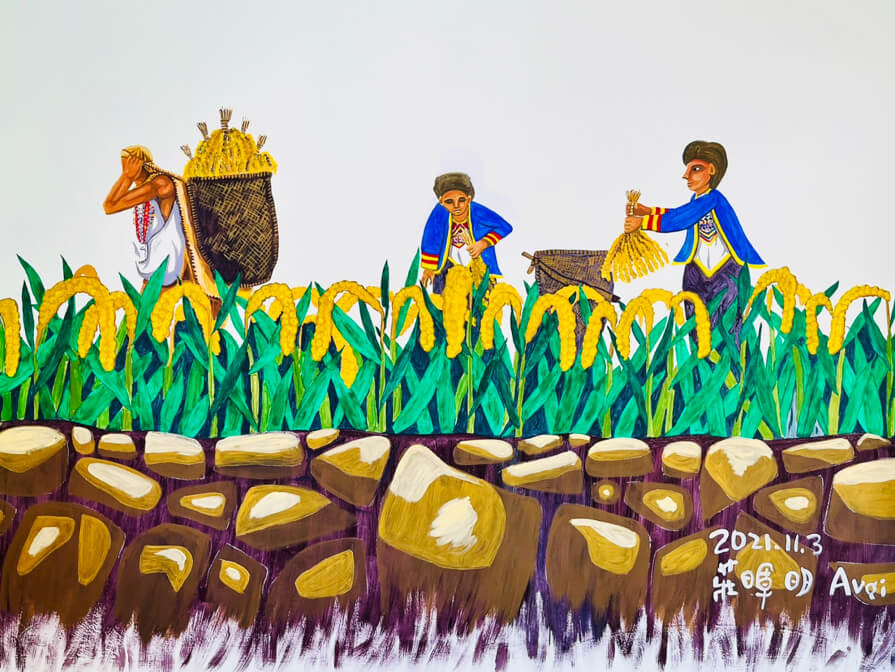 小米豐收後，每年舉行的小米祭，是部落的一項重要大事，整個部落的人都會一起參與、幫忙，有好多的工作大家要分工合作，除了感謝小米女神帶來今年的豐收，讓我們可以有富足的生活、生長飽滿的小米可以採收，同時也祈求上天賜予豐沛的雨水，讓明年作物長得好、長得健康，能繼續照顧部落裡的族人們。
The rich golden millet, is an important food crop for Tsou people. Extraordinarily gorgeous.
July and August are harvest season for millet. Before the millet is harvested, the men in the tribe sharpen the sickle, repair and weave the pack baskets of millet. So it can be strong enough to protect and store the harvested millet. This is a very rough job, which requires strong men to help.
Women hold millet in their hands, cut off the stalks right underneath their palms with sickles, tie the millets together with threads, and gently put them into the pack baskets, which will be carried home by the strong men.
In order to be stored for a longer time, the bundles of millet will be dried under the sun to absorb enough sunlight.
After the harvest, the annual millet festival is an important event for the Tsou people. Since there are a lot of works, the whole tribe will join and cooperate with each other.
The purpose of the annual millet festival is for thanking the goddess of millet, who brings the harvest and provides the Tsou people fulfilled life. At the same time, the tribe prays for abundant rain, so that the crops will grow well and healthily, and the clansmen can be fed well next year.
返回藝廊
一起準備小米祭Homeyaya(穫米亞亞)！
莊蒼菁'avai阿伐伊．諾札契亞納 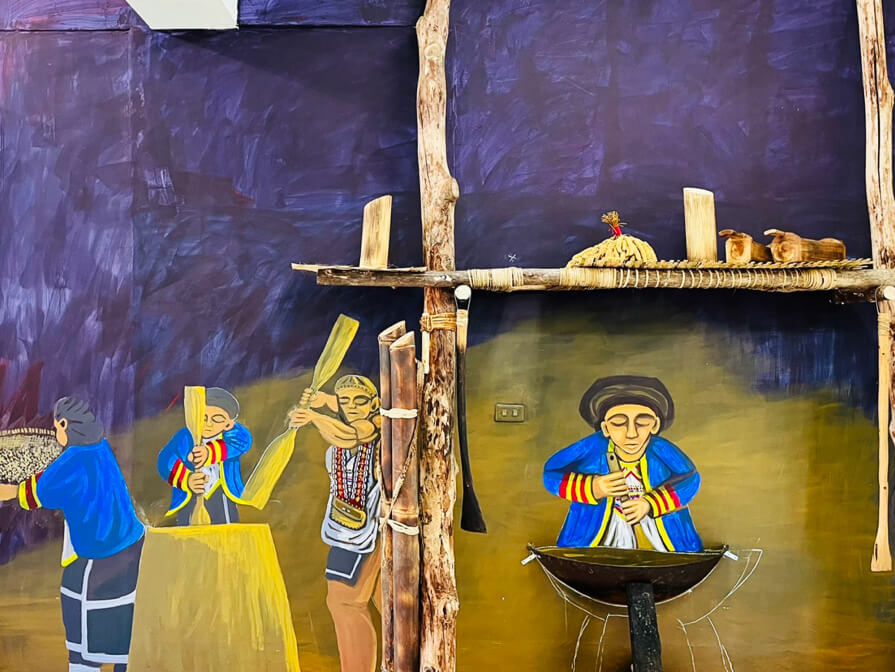 家人們共聚分享，參與祭典外，更會一起準備豐盛的餐點，並先邀請部落的長輩、耆老到家中享用，給予家人祝福，分享喜悅。期盼明年的農作物也能得到女神的保護，持續豐收，擁有富足的生活。
After the millet is harvested in July and August, the most important thing is the millet festival Homeyaya!
We would like to thank the Goddess of millet, thank for protecting millet in the past year, so we can have a bumper harvest.
For the Tsou people, the millet festival is like the Lunar New Year. It’s a really big deal and the whole tribe will come and enjoy it.
In order to prepare the millet wine for the festival, the clansmen will sieve the dried millet, start to pound the millet, and then cook the millet to make millet wine. Before the ceremony, the clansmen are forbidden to eat fish, green onion ,ginger, garlic, and sweet potato. Because the goddess of millet loves cleanliness, the clansmen will cleanse their bodies, clean the sacrificial house, wash the pots, pans and tableware, and dried under the sun. The goddess of millet will be satisfied if the environment is organized. On the day of the millet festival, the elders will worship the gods with millet wine, meat, glutinous rice cakes, thank the goddess of millet for a bumper harvest, and pray for blessings for their families.
Besides a big reunion in the ceremony, the family will invite the elders of the tribe to their house and share a sumptuous meal with them, giving blessings to the family and sharing the joy. Hoping the crops will be harvested under the blessings of the goddess of millet, so that they can have a rich life.
返回藝廊